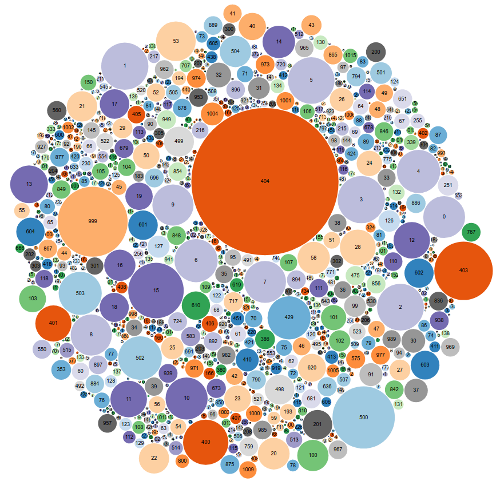 (Not a color blindness test)

Error codes in computing are a curious heritage of a bygone era when paper was relevant and memory usage stripped to the bare minimum. In those days, it was normal for a programmer to stumble upon an error code, stand up, reach for a dusty manual on a shelf, look up the number to find a more verbose description and figure out what was wrong.

Despite several attempts to make error messages more informative or useful without having to look them up, a worrying number of people has at some point stumbled into the number ‘404’ or ‘500’ and gazed in wide wonder at the meaning of it.

I was interested in finding out what were the most prominent error messages on the web (besides the obvious HTTP errors). I decided to go about this task by harvesting Google queries and using the number of hits found for determining the popularity of the results OR: how many pages can we find on the web on that subject. It is important to notice that this is an absolutely approximate number, as stated by Google themselves, and that this should not constitute rock-bottom data, but just something to have an idea of the size.

I decided to limit the number of errors analyzed to 1024 for practicality and in order to output a visualization that wouldn’t result too messy. Then I proceed to write a python script that would query Google for the string “Error x” (with quotes, exact query), with x from 0 to 1023. With a simple regex (is there such thing?) I extracted n from the “About n results” line on each page and generated a csv which was then fed into the amazing D3.js. And that was that!

So as predicted half of the top ten is occupied by HTTP errors, while the rest is taken by Windows (Error 15, File not found), the iPhone (Error 1, actually -1, iPhone could not be restored), iTunes (Error 2, Apple Application Support failing to install), Chrome (Error 3, update error), Yahoo (Error 999, account temporarily locked) and again Windows (Error 5, access denied).