What makes a face unique? Faces are packed with details and information about a person’s past (age, sex, race, identity) and future (attention and focus). How much detail can we remove from a face before it stops making sense to us? One possible approach would be to reason in pixels and find the minimum resolution required to make a face identifiable. For instance, the following image has only 24×24 discrete points. 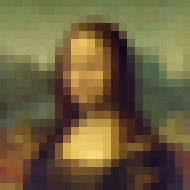 Another approach is to reason like a facial recognition system. In the world of biometrics, there are several ways to identify each face, and they are often combined to achieve better results. One of these approaches consists of tracking distinct features of a face, (chin, mouth, left and right eye…) in a 2 or 3D space. Measuring the distance between those points can yield good results in identifying a face.

This is where polygonSelfie enters the picture. Looking at the wireframe version of our faces reveals a seductive and deceptively simple aesthetic. Gone are the messy details of the window to our soul. We are left with a barebone, vectorial version of ourselves. As selfies continue to represent the story of Narcissus in the XXI century, polygonSelfie offers us a peek into an increasingly likely future, one in which the continuous merging with the Machine and the acceptance of a universal Panopticon have become the norm.

polygonSelfie is an Android app, compatible with most mobile phones and tablets with an integrated camera. polygonSelfie is very processor-intensive and its prolonged usage may over-heat your device. polygonSelfie could not exist without the fabulous community behind openFrameworks, the powerful dlib toolkit and, last but not least, Boris Nikolaevich Delaunay. WikiBinge is a tool for creating interesting paths between two subjects chronicled on Wikipedia. WikiBinge generates the story of how flimsily Alpha is connected to Omega and compels you to follow that rich, linear narration through unexpected discoveries and findings.

But what does “interesting paths” mean? Those familiar with the theory of six degree of separation won’t be surprised to discover that it’s possible to connect most Wikipedia articles following just a few links. However almost every shortest path is ridden with banality, passing through huge hyperconnected articles like “United States of America” or “World War II”.

WikiBinge instead tends to generate paths that require dozens of links to reach the destination. What matters is the journey, not the destination. Embracing this spirit, WikiBinge selects the smaller, less represented articles on Wikipedia during this journey. In a WikiBinge path the underdogs are the kings.

What WikiBinge shows during this journey mirrors the distribution of content on Wikipedia. It’s quite common for a WikiBinge path to go through unknown actors, sportsmen or remote places. This is consistent with the findings of previous studies on the distribution of topics in Wikipedia, like [Kittur, A., Suh, B., Chi, E. (2009). What’s in Wikipedia?], which places at 59% the amount of content about “Culture and the arts”, “People and self”, “Geography and places” on Wikipedia.

Also, editors of the English version of Wikipedia (which recently passed the 5 million article mark) tend to have an English Bias, a Western Bias, and they tend to be highly educated and computer savvy. This is all reflected in the results of WikiBinge, as you will promptly find by navigating through a streak of 15 articles about lesser known comic characters.

That everything is connected with everything is now common sense. But it’s how things are connected that keeps surprising me over and over, even as a longstanding fan of James Burke’s Connections.

WikiBinge is the product of a society with a problem of information overload. It reminds us how compulsive consumption of information is deeply ingrained in our way of thinking and how fiddling with snippets of information for its own sake is like trying to quench an infinite thirst.

This is perhaps why WikiBinge is, like “The Road Not Taken”, a wolf in sheep’s clothing. It fools us into thinking about the beautiful results of choosing the path less traveled, but its self-deception is revealed too late, when we’re sinking in an ocean of information. And sinking in this sea is sweet to me… Memeoirs was my third startup and definitely the one I loved the most. It was a webapp that allowed anyone to create a physical book out of online conversations. Email, Facebook or WhatsApp. Have you ever wondered what will happen to your letters and messages after the digital holocaust? We had the solution for you.

Developed with some of my best buddies under the collective name of Fitmemes, Memeoirs was born after an epiphany while staring at my mailbox. Laying in front of me were thousands of letters documenting more than half of my life. Just over a year later Memeoirs went online, where it stayed for 5 amazing years during which it lived all the phases of a typical startup. What follow is the original manifesto of the project.

Memeoirs: your emails in a book. Seriously? Yes, no joke.

We take communication very seriously and we realized the evocative power of our past correspondences. Being able to experience again the emotions connected with what we wrote and what others wrote to us can be a real thrill. Sometimes it’s like staring at the novel of your life.

While being participants of the pervasive real-time frenzy of The Internet, we at Fitmemes are also strong supporters of All Things Physical and of the reassuring stability of printed press. “These words will forever be on this page” reminds us of the value and the mono-tasking dedication we gave in writing a snail mail to our peers.

Created to merge this duality, Memeoirs is as broad and versatile as email can be and it reflects the habits of the author. It has been used to collect love letters, buddies emails, academic exchanges and even meeting minutes.

No matter what kind of email user you are, if you are reading this it’s because you probably give to your writing the attention it deserves. By bringing letters back to paper Memeoirs gives the opportunity to convey the timelessness and profundity of your ideas in a book. Make the best of it.

Slippery Concepts is semantic-crossword explorer. Start with a word of your choice. Clicking on a letter of that word, a new one is crossed. The relation is twofold: there’s an orthographic connection (the two words now share a letter in common) and a semantic link. The new word can be a synonym, a hyponym or a hypernym of the original one. This is the beginning of a journey that can potentially bring you from any word to any word in a given number of steps.

Henry Adams once said that “no one means all he says, and yet very few say all they mean, for words are slippery and thought is viscous”. Slippery Concepts is a way to experience that first hand, building stairway-crosswords that rise up to new unpredictable meanings or slip down to the very core of language.

Conceived for a touch table installation, Slippery Concepts can be fun from a browser too. 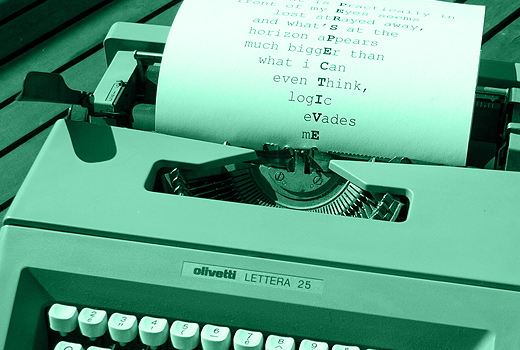 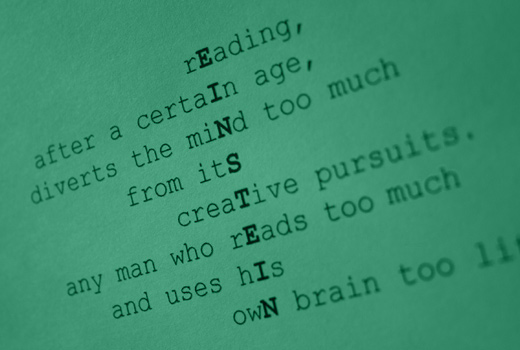 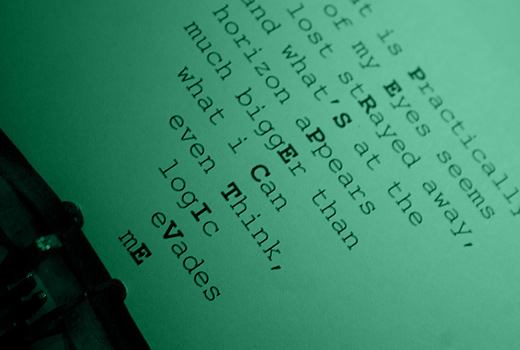 A mesostic is like an acrostic with a poetic license: the vertical word intersects lines at any point instead of just at the beginning. Mesosticator is a very simple tool to help building up verses ala John Cage. The task is made particularly easier if either the vertical word or the larger horizontal corpus is already formed.